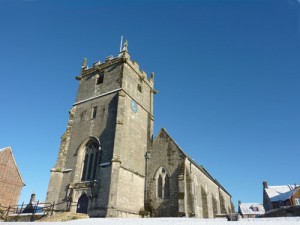 The Church was probably built during the 12th century. The earliest known incumbent is recorded in 1280. It was named after St Edward the Martyr who was murdered on 18th March 978 on the orders of Queen Alfthryth, his stepmother. The story goes that his body was hidden in a hovel where a blind woman discovered it. Her sight was restored when she found the body. This is where the present church stands. The early church consisted of a nave, chancel, a narrow north aisle and a large north porch and was enlarged during the 13th century with an additional aisle.

During the Civil War (1642-1646), Parliamentary troops stationed themselves inside the church using the church as stabling for their horses and men. Much damage was caused – church records were burnt, the door was used in battle and masonry used for target practice. Shot marks can still be seen both inside and outside the church.

In 1859-60, the church under went a major restoration mainly because the walls were bulging out by a foot (30cms) so all the walls were pulled down, apart from the tower, and rebuilt. Galleries that had been installed in the 18th century were removed and the church re-roofed. The east window was replaced and all the chest tombs removed to create more space. It was re-consecrated on 23rd June 1860 and it poured with rain the whole day so the festivities had to be postponed. 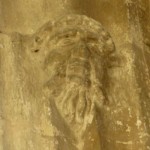 The tower was built between the late 14th or early 15th century by the Beaufort family (Constables at the castle during this time).

Their faces can still be seen inside the church as John of Gaunt (pictured) & his wife, Catherine, look towards the western door from high above the tower arch over the baptistery. Edward III and his wife, Philippa, look towards the altar. The tower rises to 65 feet outside. 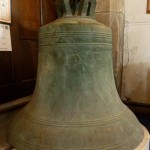 Up to 1774, there were only 5 bells in the belfry but there are now 6 with the earliest dating from 1795. The original No 5 Bell (pictured) cast in 1739, was replaced in 1999 when restoration work was undertaken in the belfry. This bell is now situated in the north aisle.

There has been a clock on the tower for over 400 years. The present one dates from 1864.

Dated to the 15th century, there are ten oak bosses from the old chancel roof above the sanctuary. Four show the letters O, H, W & G which would have formed part of an inscription.

The statue of St Edward

This was designed by Francis Newbery and carved by Walter Haysom. It was erected on the eastern gable in 1931.

The piscina in the Lady Chapel

This was given to the church in 1942 when the church was refurbished again. It was rumoured to have been found in the village and is thought to date from the late 13th or early 14th century.

This dates to about 1450 and is made of black or ‘reddish’ Purbeck Marble. The font cover was made by Martin Travers in 1940. It has a pulley system to operate it.

On the south wall is an example of a 13th century coffin lid for a heart burial. These allowed people, especially Crusaders, to have prayers said for them in a different church if their body was buried elsewhere.

Cut into two Purbeck marble tablets is an inscription in Lombardic script to Johanna & Robert Rynkyn dated to the early 15th century. 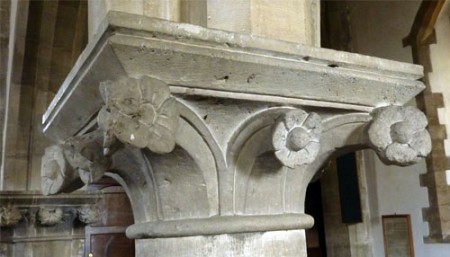 There are many examples of Purbeck marble throughout the church. The marble is a fossiliferous limestone that is found in this area. Look carefully at it and you can sometimes find shells. The church was built from this particular stone. Above you can see a carved head around one of the exterior doorways and the church’s oldest bit of graffiti dating to 23 June 1624 in the tower.

One of the capitals in the south aisle was not replaced in Victorian times. It is decorated with flowers (possibly roses) and was kept as an example from the original church. It is dated to the 13th century. 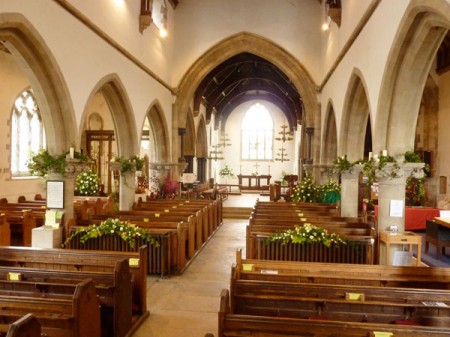 The interior you see today is the result of the Victorian makeover. Prior to 1859, the church had large tombs in both north and south aisles (there remains only a segment of one of these in the Lady Chapel incised with the lettering “Robt Abbot Gent Donr here-of’ and two remnants set in houses down West Street).

The original church roof would have been just above the arches. The Victorian altar & pulpit were removed in 1979 as was the brass lectern donated by Nathaniel Bond. The crypt lies under the children’s corner and is now inaccessible.

There is an oak screen by the Lady Chapel designed by Martin Travers (a church artist and designer) in 1935. In the chapel itself, the floor is laid with tombstones.

There are 4 gargoyles acting as waterspouts (no longer in use) and 4 grotesques which surround the tower. The gargoyle above is clinging to the tower with his toes.

The stained glass is mostly Victorian. The example above (in the Lady Chapel) was begun by Martin Travers in 1944, using parts of the old stained glass, and completed by L. Lee in 1948.

The present organ was built in 1870 and is set in a 13th century archway. There was an earlier organ in the north aisle but this was removed in 1859.

Part of the Reredos

There are two remaining pieces of the early 15th century reredos (a screen that would have been in front of the chancel) near the font. Dowel holes can still be seen in the niches where small statuettes would have been fixed.